Antony Dracup - artist painter inventor visionary
In my childhood there really were skeletons in the cupboard -and planetary systems, and clocks made with wooden cogs and all manner of diverse curiosities, experiments and hand-made wonders. Behind these cupboard doors, richly decorated with Old Master reproductions and divided into sections with carved moulding lay the encapsulation of my Father’s meaning in life - a relentless motivation to investigate, understand and enjoy art and nature, science and humanity, with true Renaissance spirit . The sharp tang of freshly planed wood and linseed oil was an ever-present essence in a painted world surrounded by hand-made furniture, frightening figures and mysterious curiosities.

My Father often stated that he wished he had been born 300 years ago. In every aspect of his life (as far as can be achieved in the 20thC) he did indeed remain faithful to a life which seemed to marry the principles of Victorian  industry with the creative spirit of Renaissance Man. He remained devoted to a life which rejected the ‘easy way out’ because he wanted to have as much direct contact with the act of creation as possible. He shunned power tools in favour of hand tools, the car in favour of the bicycle, the camera in favour of the pencil and brush.

Whether re-binding an antique book on the Natural World or carving out rooms in a sandstone cave, he rejoiced in the learning that these activities brought to him. The act of making was, for him, a labour of love. It was indeed through his industry that my brother, my sister and myself experienced his love. For what he was unable to offer us in terms of physical comfort, he made up for with, for example, detailed working toys made of wood. Or a home graciously transformed by his hand. This was his embrace.

Completely self-taught not only in painting but in many other disciplines, he began a career as a professional artist in 1963 when his office-job with Yale in London was seen to be a dead-end. He walked out into the open skies of the urban landscape and never turned back. The subject-matter was inexhaustible it seemed, and he was drawn into the ‘Bayswater Railing scene’ as one means of selling work. Here he managed to generate contacts with buyers from around the world and though family life was very hard, he did -with incredible patience and support from our mother- manage to provide a reasonably comfortable life for us.

Though he was quite eccentric, this was not the ‘crazy artist’ persona so fertile in the 1960’s but a quite professionally managed affair. This can be evidenced from the strict cataloguing and accounting in his many note-books where every transaction has been carefully documented and archived with added informative comments.

Just as we now record scenes photographically, so my father created watercolours, of uniform size, of just about every street and alleyway in London. And when he moved to Bridgnorth in 1980, he continued in the same consistent vein. In the same way that his figure would appear on the corner of a street in Battersea, so it would appear on Castle Walk in Bridgnorth, fixed in concentration, oblivious to the hubbub around. With paper and home-made watercolour kit in hand as emblems of defiance in an increasingly technological world he would paint another urban landscape that he would catalogue and file according to geographical area.

As a contrast to the paintings he produced for commercial gain -the Buckingham Palaces and Trafalgar Squares- his more sensitive and prolific work was usually of the humble main road or back-street, forgotten buildings and industrial canalscapes. I often felt that he bestowed a greater respect on these ‘humble’ subjects almost as a way of expressing a kind of personal socialist  levelling system. Nevertheless, he managed to bridge these two worlds with extraordinary skill. There are two other aspects which he bridges as well. In the field of watercolour painting I have often seen, on the one hand, architectural painting which captures the formal accuracy of buildings and on the other hand,  the wilder ‘free’ painting which embodies the spirit of the place. And these approaches always seem to be kept apart. But in my Father’s work I am often find that both of these elements seem to be acting together in harmony. I witness at once, the accuracy of observation combined with a free hand that demonstrates his absolute confidence with the medium. The sensitivity with which he depicts a misty Autumn street with solitary lamp-post glowing orange in the dusk speaks volumes about his humanity and respect for all things as equal. And this was also reflected in other aspects of his life.

He set a consistent example of this wisdom of frugality by only taking or consuming as much as was necessary. This would sit well in the current climate of austerity. In fact he probably upcycled long before it had become a cause. And he was already ‘making and mending’ even in the affluent 60’s. Whether turning cardboard tubes into telescopes or creating a door- step mosaic from broken ceramics and glass, or a lampshade from the tin of an oil can, he certainly demonstrated both aesthetic and engineering resourcefulness.  This certainly inspired us as children to grow up in the realm of possibilities; Of the human ability to transform basic materials into something useful or beautiful or in this case -both.

His love for the glory of art and industry past led him to paint the buildings and streets of London which he suspected were tagged for demolition. This was his way of preserving their memory. If we look on the backs of these watercolours now we can often see the words “SINCE DEMOLISHED” inscribed in bold capitals -suggesting that he must have returned to the location at a later date only to find with great sadness, that another valuable architectural masterpiece had been bulldozed into oblivion. The upside of this was that many libraries became interested in his work not just for their aesthetic value but also as a historical record in themselves. This resulted in his work being shown in local exhibitions, particularly in the Borough of Ealing in West London where much of his work was introduced into their archives.

I remember my father’s overwhelming joy at being able to swan into a gallery or museum in London for free - something he never took for granted. “How amazing”, he would say “to be able to spend the whole day surrounded by all this creative energy; to be able to sit and draw and absorb all this marvel of human creativity for free!”.  He was referring as much to the buildings themselves as to the work they contained. He felt lifted and regenerated in the presence of such an atmosphere and was compelled to recreate this oeuvre of the museum his domestic environment.

Every house that that he took up residence in received the ‘Dracup treatment’ - arches, pillars, balustrades, moulding; marbling, graining, varnishing, stained-glass all designed and crafted from start to finish by his hand. In Railway Street, Bridgnorth the whole house was turned around –the staircase, literally - because it better suited the layout of the upper floor.  And before leaving no surface untouched decoratively, he began with the walls – building an extra layer of bricks inside the original one to improve insulation from noise.  And the ‘heavy engineering’ was not limited to the interior. Not satisfied with the perfunctory cave in the back yard which came with the property, he set about levelling the floor and creating rooms further in. In true Colditz style -a little every day but persistently - he chiselled away. His persistence was rewarded with noticeably stronger chest-muscles and extra living space. The sand which was the by-product of all this carving was mixed with cement and went into home-made moulds to make bricks that would become the materials for  Gothic-style arches. These were installed into the space to create the effect of appearing to support the ceiling from front  to rear of the cave.

Whenever I walked into the bathroom it was like walking into a Captain Nemo film set. Just behind the door stood a huge copper boiler with bolted on cast-iron lion’s feet. A network of copper pipe work led to and from the boiler which sat on top of a conventional gas-ring connected to the main. This simple idea really worked and was the home-made central-heating system for the whole house. Three taps sat at the end of my father’s bath labelled ‘H’, ‘C’ and ‘R’ -hot, cold and rain! Believing that rainwater was better for the skin he installed a storage-tank and filter which collected rain water from the roof and channelled it into the water system.

As if to really demonstrate his ability to integrate the arts and sciences, more heavy engineering went into the creation of a near-vertical garden above the cave. By way of a ladder it was possible to access the four levels of terracing, oddly and asymmetrically designed so as to fully involve the climber in the experience -you daren’t put a foot wrong here! Antony believed that asymmetry created interest for the eye - it had to work more. Cast concrete, decorative features and moulding shared the daylight with lettuce, tomatoes an apple tree and much other edible produce. A vertical kitchen-garden which, to my father’s delight,  was once mistaken for a Roman Ruin in a local aerial survey.

Just as I had witnessed in my childhood, he continued to weave his craft -both practical and mystical- throughout his life, regardless of attention, not seeking praise or honour for his efforts - and many times, actually rejecting it. He would see this particular publicity as unnecessary attention-seeking such was his humility. He was a principled man, a humanitarian devoted to the experience of learning for learning itself and art for art’s sake.  And this is how he continued until his untimely struggle with a progressive lung-disease which gradually robbed him of that much-needed oxygen which he required so plentifully. Despite a move to Barmouth in Wales where he spent the last two years of his life and where he hoped the sea air would relieve him of his illness, nature had one more lesson to teach... That no matter what skills or genius we posses, none of us is excused from this final destination. As in his work, where he brought the ostentatious in line with the humble he too succumbed to the ultimate levelling act, passing away in Dec 2002, aged 72 leaving an extensive legacy of work. With paintings still in the chests of drawers he placed them in, still categorised in sections marked ‘Ealing’, ‘Westminster, ‘Bridgnorth High Town’,’ Wolverhampton High Street’ etc… I am only now properly releasing them into that air, that light - the humble light that marks an extraordinarily ordinary day.
Dennis Dracup 2015 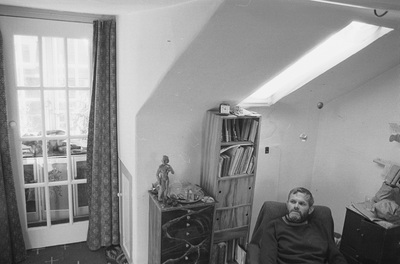 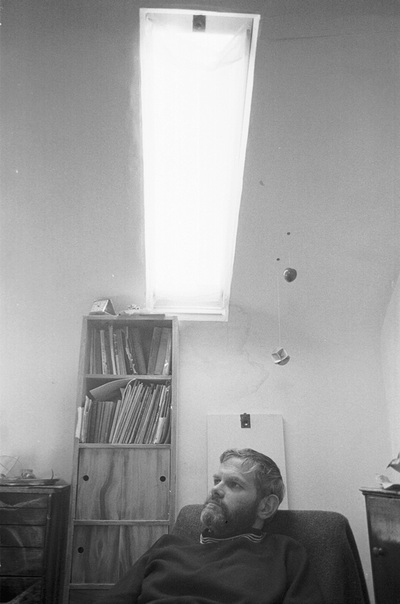 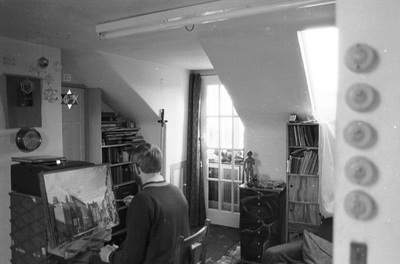